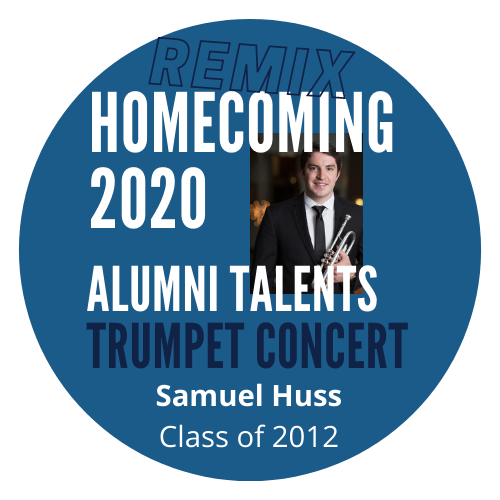 Meridian Alumni Class of 2012, Samuel Huss, shares his magical talents for Homecoming 2020 Remix. As the Principal Trumpet for the Richmond Symphony, he is a celebrated musician with proud hometown roots. He has challenged the Meridian community to a Tik Tok dance challenge. Summit your Blinding light video with the  #meridianhoco2020.

Originally from Sanford, Michigan, Sam started out his life as a trumpeter after being given his mother’s trumpet in the fifth grade. In high school, Sam began his studies with Dr. Dennis Horton. Sam attended the Eastman School of Music and earned a Bachelor of Music Performance studying with James Thompson. He recently completed a Master of Music degree from the Shepherd School of Music at Rice University where he studied with Barbara Butler. Sam has been a fellow at the Tanglewood Music Center as well as a member of the National Repertory Orchestra and the National Orchestra Institute.

Before starting in Richmond, Sam has performed with the Rochester Philharmonic Orchestra and the Alabama Symphony. Sam has been an award-winning soloist in several competitions. Most recently he was award 2nd prize at the 2016 Ellsworth Smith International Trumpet Solo competition. Sam has been a featured soloist with the Galveston Symphony Orchestra, the Midland Concert Band and the Huxford Symphony in Alabama.

When not performing, Sam loves to spend time with friends and family as well as finding ways to explore and enjoy the outdoors.